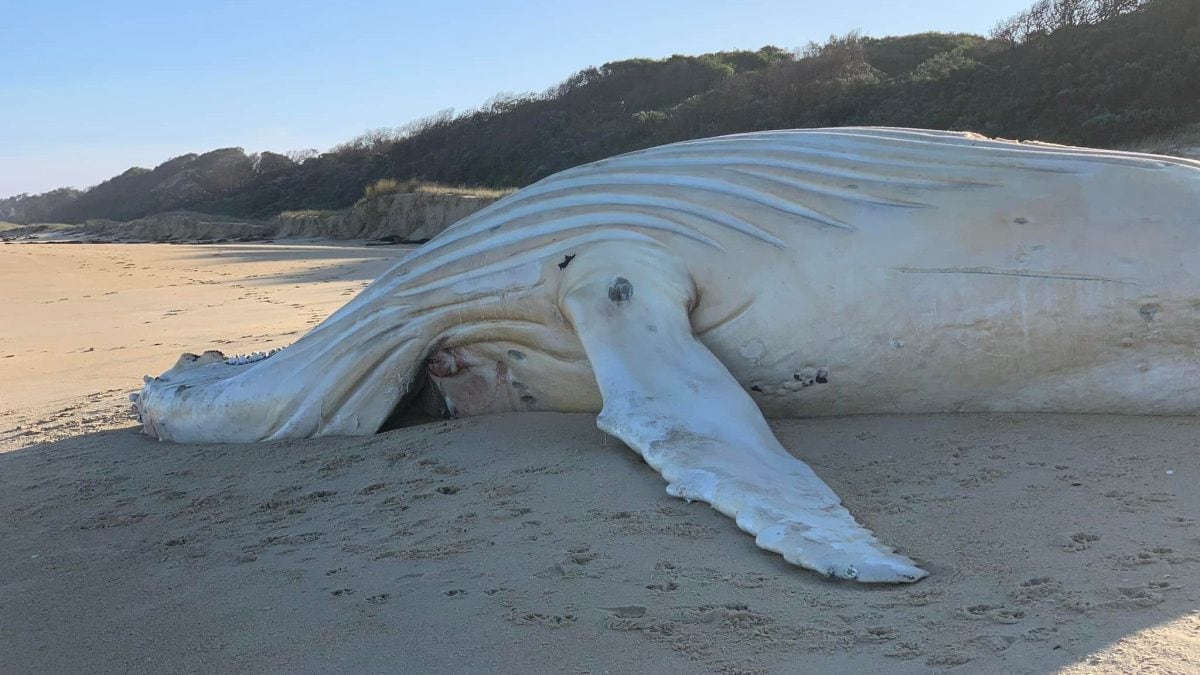 Recently on the beach at Mallacoota in Australia, state of Victoria one has been found white humpback whale. It is almost an impossible beach to get to, a boat is essential. One of the villagers, Mr Peter Coles, was the first to take a look in his kayak.

I could see it from afar, but it was a very strange color, it looked like a white mass, but the closer I got, the better I could see the stripes on its belly, so it was clearly a whale. I took a good look at it and took pictures in case someone needed to identify it. It was quite spectacular, it looked like a beautiful kind of white marble sculpture.

To the disappointment of many, it is not about Migaloo, famous albino male white humpback whale. He has been sighted for 30 years, regularly in Australia. 1991 was the year of his first sighting in Byron Bay. However, it has not been seen for two years, it is unusual and worrying for scientists. The discovery of the white humpback whale’s carcass immediately made you think of Migaloo. Too bad the Victoria State Department of Environment, Land, Water and Planning (DEWLP) footage has proven otherwise.

DELWP agents examined images of the dead humpback whale in Mallacoota and confirmed that it is a sub-adult female. Migaloo is a boy.

Peter Bick, commander of the DELWP (Department of Environment, Land, Water and Planning)

On the other hand, the discovery is always a cause of regret for the death of a young specimen. Scientists don’t know if it’s an albino whale or with leucism. The black color seems to fade after death. Other studies will shed some light. Humpback whales have one mortality of the 4% and most die a natural death. The dead animal has no clear cause of death yet, but further tests will check for injuries or other causes of death.

‘The Big Scam’ will have a prequel starring Margot Robbie

Malik Ndiaye: A 12-year-old Senegalese who built a telescope from his father’s wire, cans...

Horizon Zero Dawn: A Remastered Was Coming To PS5 Along With A Multiplayer Game

“Shaun, the life of the sheep” goes to the moon