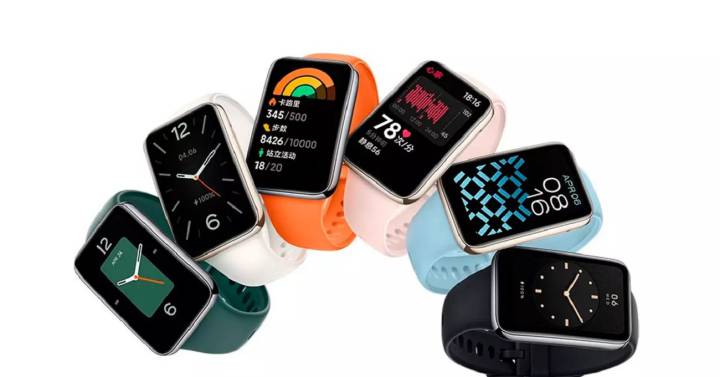 Much has been said about the vitaminized version of the Asian manufacturer’s latest smartband. And now we can confirm how the design and features of the Xiaomi Smart Band 7 Pro will be just as we expected.

We see it on an aesthetic level The first big change between Xiaomi Smart Band 7 and Xiaomi Smart Band 7 Pro. More than anything, because the new model finally bets on a rectangular design reminiscent of an Apple smartwatch. Highlight the brushed aluminum surfaces to give this wearable a premium look.

Otherwise, this smartwatch-like activity bracelet has no buttons, as all options will be controlled from the device’s screen. Note that you won’t have to take this wearable apart to charge it, as it has a similar system to the Xiomi Smart Band 7.

when it comes Technicial SpecificationsThe first major innovation is now seen on the screen of the Xiaomi Smart Band 7 Pro, which has a 1.64 inch diagonal and AMOLED technology.

Through the use of this panel, Xiaomi’s Mi Band 7 Pro promises an improvement in its autonomy, Besides having auto brightness and an Always On Display so you can always see the time, it’s already great on its own.

Continuing with the technical features of this new activity bracelet, the Xiaomi Smart Band 7 Pro has all kinds of sensors to monitor every step you take, in addition to an element we have been requesting for years: GPS.

Finally, you can go out to workout without carrying your phone with you, as the Xiaomi Band 7 Pro can track every step you take. Available in six colors, currently available in China for 399 yuan, about 57 euros to change.

We currently do not know when they will launch this smartband to other markets and its official price. But we can assume The Xiaomi Smart Band 7 Pro will arrive in Spain next month for around 70-90 Euros.

Five Signs You’re Allergic to Foods You Have Recently Eaten